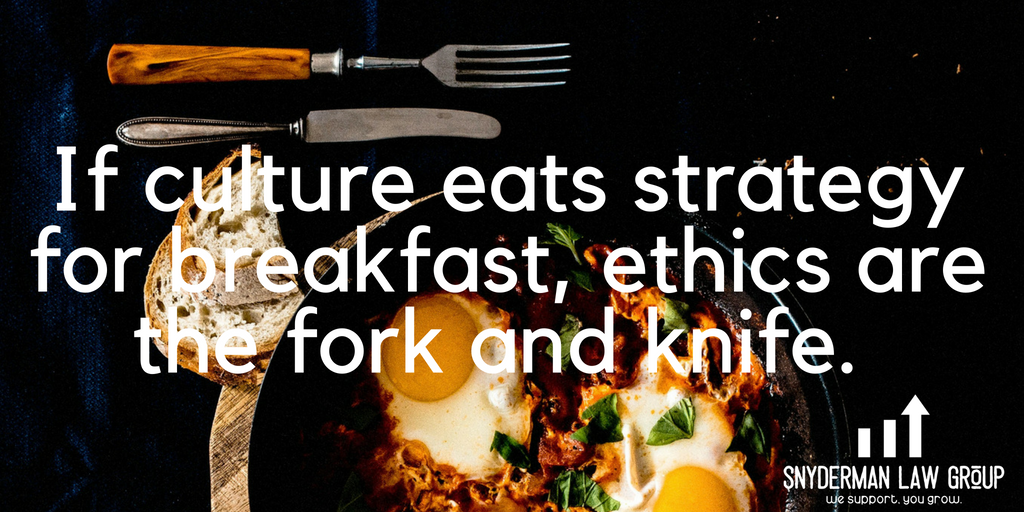 “If culture eats strategy for breakfast, ethics are the fork and knife.” – Snyderman Law Group

If you’ve been paying attention to any of the management theories that have been introduced within the past 10 years, you’ve no doubt been hit over the head with the notion that company culture drives an organization forward. Culture affects employee engagement, retention, and can therefore boost profits.  We now know that culture is a company’s personality and that it shows not only your employees but also the rest of the world what kind of organization you really are.

Cultivating a company culture is no longer an option; it’s a necessary part of doing business.  We are seeing more and more that a company’s culture is more important than salary for many employees.  This epiphany came thanks to the Millennials’ entrance into the work force.  Going to work every day to a place you love is not a new idea but as Simon Sinek told us Millennials are the first ones to have the guts to expect it.  We are now in the age of ‘whenever, wherever, whatever.’  People no longer want to work a 9-5 job in an office for the rest of their career.  They want to work whenever they want, wherever its convenient for them for whatever length of time they decide.

So companies have adapted. Summer Fridays, remote positions and generous leave policies are now de rigueur. Tony Hseih at Zappos has resisted the goliath of Amazon for as long as he has because of the culture he helped shape.  Zappos reinforces its culture in everything it does and promotes its fun happy environment in a way that makes employees enjoy the work.  It follows then that this drives customers to want to go back to Zappos because they know that they will receive the best treatment possible along with great prices – a great recipe for success.

But in all of this talk about company culture, there is something significant missing, like a house of cards built without enough foundational cards.  The foundational piece missing is Ethics.

The reality is there is no way to have a company culture that drives an organization forward unless the company has an ethical culture.  We hear about ethics all the time but never in the same sentence as culture.  They are treated as different animals that coexist in separate contexts.  They call it business ethics and have college and MBA courses on it. Its touted as a company’s social responsibility and moral compass.  But we have to stop talking about ethics and culture separately – it’s one discussion.

Let’s look at Wells Fargo, your favorite banker’s favorite bank.  Wells Fargo bankers opened millions of fraudulent checking and savings accounts without their client’s consent.  This is obviously unethical.  But how did this happen?  We’re not talking about a rogue employee. This was pervasive throughout the company.  What has been discovered is that Wells Fargo had a cutthroat sales culture that incentivized employees to cross-sell financial products to their customers.  It was this company culture that led to the unethical behavior.  Together, they contributed to the scandal – you can’t have one without the other here.

Unethical corporate behavior comes from fear, greed, pressure or convenience.  So it follows then that corporate cultures must address all of these in order to curb unethical behavior.  Employees must know “how we do things around here” so that they enjoy their work and don’t feel the need to act unethically.  Alex Edmans, a finance professor at London Business School found a direct correlation between a corporation’s ethics and its profits. Edmans used 26 years of data to show that ethical treatment of workers is associated with 2-3% higher stock returns per year.   So if both culture and ethics can lead to higher profits, the conversation needs to revolve around the two together to really propel an organization forward.